The store will not work correctly in the case when cookies are disabled.
Menu
Account
Settings
Currency
Currency USD

The fireplace and fireplace accessories often follow the style of the architecture and furnishings that are in fashion in a certain period. The styles of royal houses pass through noble castles into the houses in villages and cities.

Furthermore, there are fireplace accessories that are made in the time of a certain style and those that are reproductions from a later period. Those reproductions can also be quite old. In particular starting in 1850, there was a revival of different styles. The impact of the French Revolution (starting in 1789) in the motifs used began to die down, and even reproductions of firebacks with royal (Bourbon) motifs were freely made starting in 1850.

Our fireplace accessories largely come out of France. Because of that, we have used the sequence of styles in France, with the addition here and there of styles from England and Germany.

Characteristic for this period is primarily the use of wrought iron and the rise of the cast fireback around 1500. Wrought iron andirons are much older. The first andiron was found in Pompeii. In the Middle Ages, andirons took on the rustic form that you often still see now. They are often fitted with spit hooks and cups on the ends.

In the Gothic style, the illustrations on firebacks are primarily religiously inspired. They have primitive motifs, including primitive coats of arms, and religious symbols.

Tudor is a specific Gothic style in England during the first period of the Royal House of Tudor (1500 – 1560). It is a late Middle Ages style that occurred in a later period than on the continent, where the Renaissance style began in 1500. 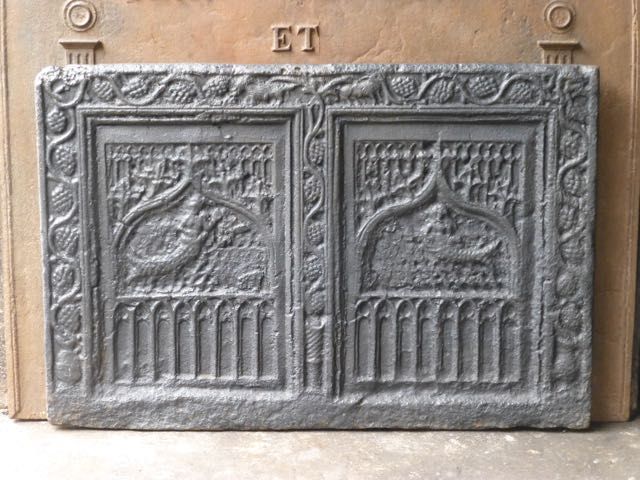 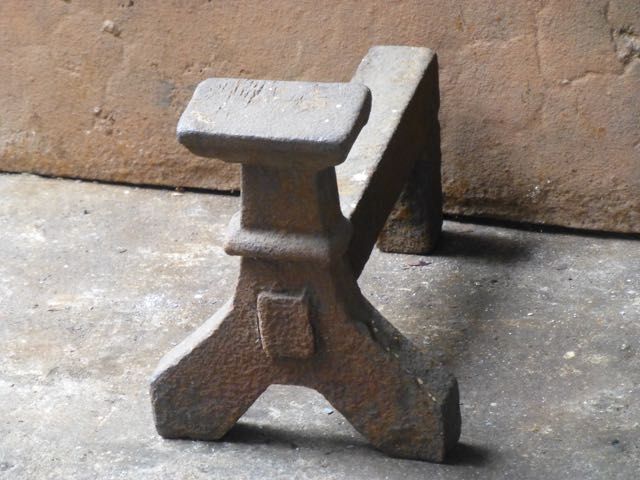 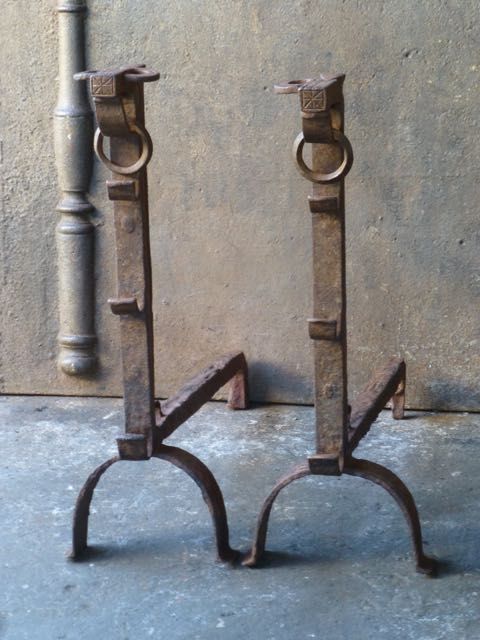 This style is based on influences from classical Italy, where the architecture follows classic themes. Motifs are inspired for the first time by scenes of the period itself, or by mythology. Next to religious themes and coats of arms, firebacks now also portrayed mythological scenes. Very common symbols are garlands of acanthus leaves, cupids, birds’ feathers and scallop shells. In this period, firebacks appear bearing the salamander, the symbol of Francis I. The first firebacks with the coats of arms of the Dukes of Lorraine also appear in this period.

Starting in this period, andirons also appear with spit hooks in the form of scallop shells. 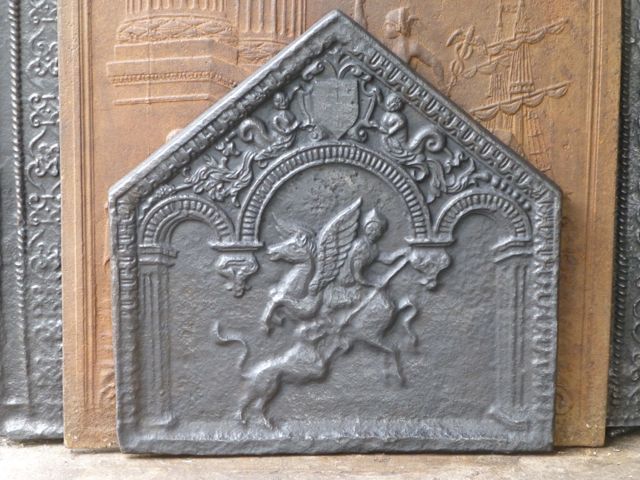 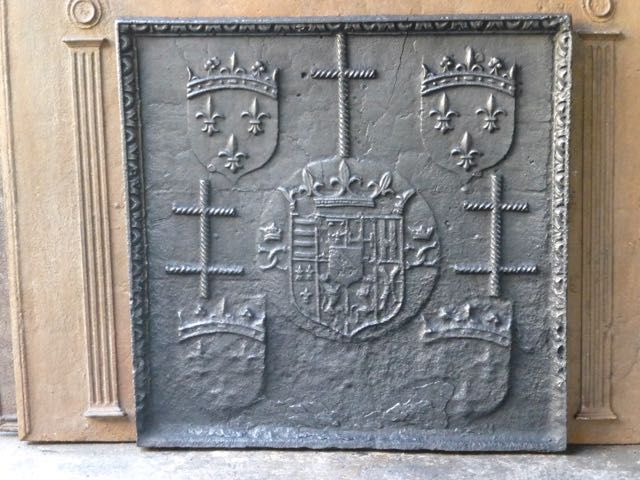 This style, just like the Renaissance style, is based on classical Italy, but it also has various other influences (Flemish, Italian and Spanish). Motifs that were used are garlands with geometric shapes, garlands of leaves (often acanthus), fruit and flowers and oval shapes.

With the rise of the House of Bourbon as the royal house of France (starting in 1600), firebacks also appeared with the symbols of the House of Bourbon, such as the Fleur de Lis. In addition, firebacks now also portrayed political events, such as peace, peace treaties and political actions by the citizens. In the Netherlands, the famous Pro Patria firebacks appeared, which portray the formation of the Dutch Republic in 1579, and firebacks that symbolized the Peace of Munster treaty in 1648.

During this period, andirons first became decorated objects, as decoration in the fireplace. Wrought iron andirons were now combined with andirons of bronze and brass. Often, both materials were used together. 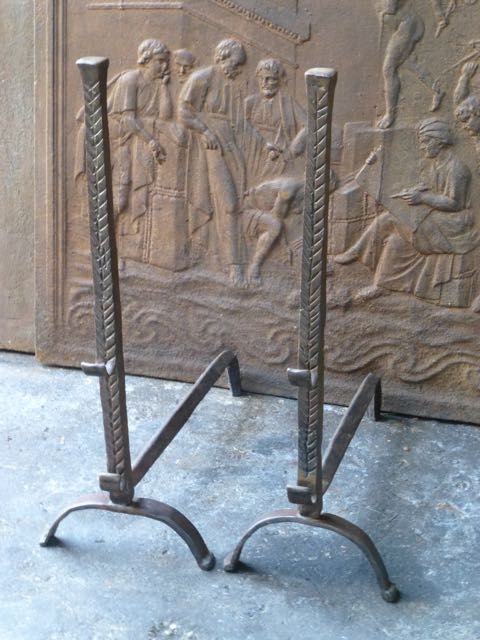 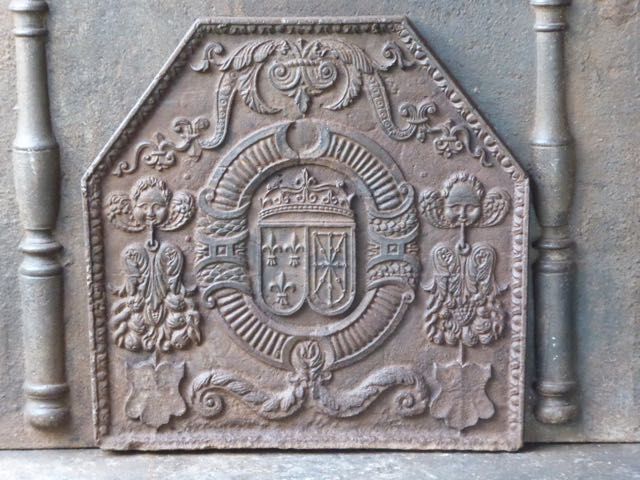 This period is known as the Golden Age of France. With this style, the Baroque style begins in France; it had begun earlier in Italy. The Baroque style departs from the classical principles of the Renaissance style and the Louis XIII style. Characteristic for the Louis XIV style is the absolute symmetry and the rich treatments. The style is bombastic and radiates excess and power. The Louis XIV style is inspired by ancient Italy (Rome, Julius Cesar).

As absolute ruler, Louis XIV had his own symbols that, next to the symbols of the House of Bourbon, were frequently portrayed on firebacks: the sun (of the Sun King), the Fleurs de Lis, the crown and leaves of victory. Many other common symbols from this time are garlands of fruit and flowers, lions’ heads and lions’ paws, masks, palm fronds, lilies, shells, laurel leaves and dolphins. 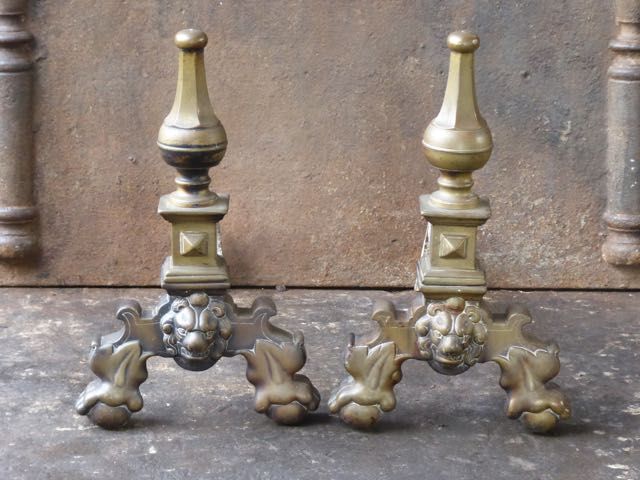 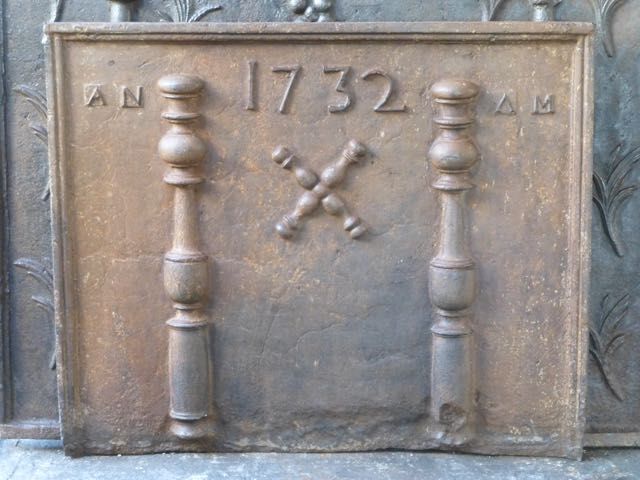 The Louis XV style is, just like the Louis XIV style, a Baroque style. It is less bombastic than the Louis XIV style, more refined and elegant in the treatments, more romantic, but just as lavish. The style features romantic, abundant decorations that are often inspired by nature, such as the frequent use of curves and the use of shells, leaves, garlands, flowers and musical instruments. The heavy lions’ paws are replaced by the hooves of a deer. Symmetry was often replaced by asymmetry, which leaves more to the imagination. In this style, bronze is used a great deal, even for andirons.

Next to mythological illustrations, many fireplace firebacks also appear in this period on which the fables of Jean de la Fontaine (1621 – 1695) are portrayed. 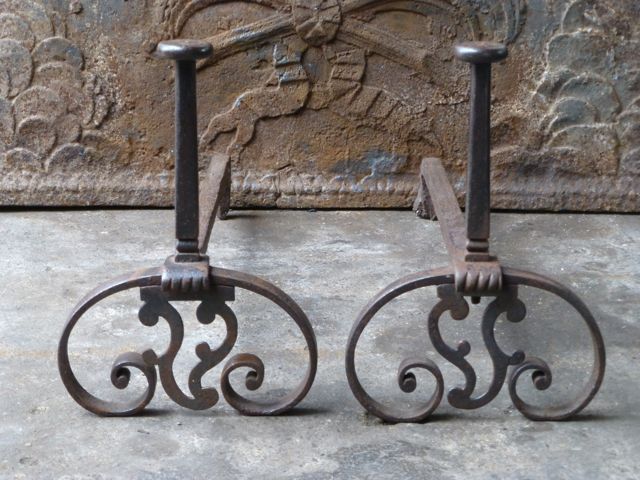 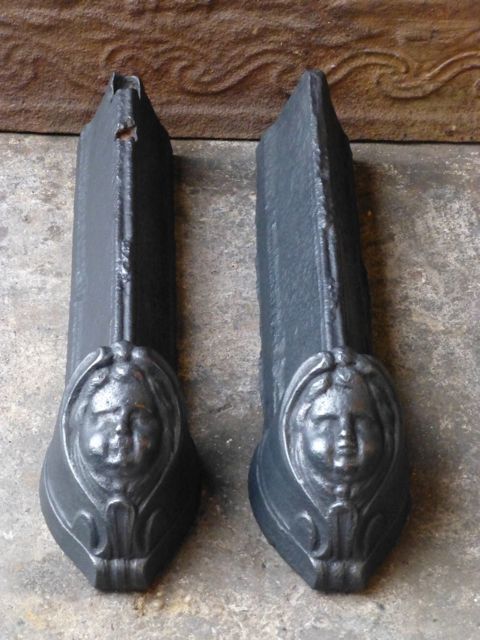 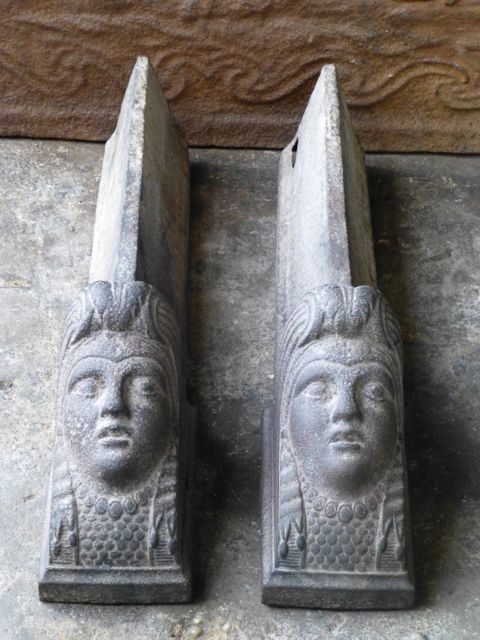 The Neoclassical style is a reaction to the excesses of the Baroque styles. Instead of a romantic notion, the rationale is now honored. This is an important result of the Enlightenment (1650 – 1800), which places the emphasis on sensory observations and logical thinking. This style is characterized by the use of pure elements and symbols from classic antiquity in Egypt, Greece and the Roman Empire. The style was fueled by several important archaeological excavations (Pompeii and the Rosetta Stone).

The Neoclassical period was also the time of the French Revolution, which began in 1789. This had a big influence on the firebacks and andirons. Firebacks and andirons had to be relieved of all feudal elements, with the Fleur de Lis in particular having to be removed. There are still many firebacks in existence on which the Fleur de Lis has been cut off. At the same time, new motifs arose, with, among other things, Marianne as a symbol for the Republic (and reason) and the Phrygian cap as a symbol for the liberated slave. The style remains Neoclassical.

The Neoclassical period was also the time when Napoleon was emperor of the French (1804 – 1814). In this period, the Empire period, the Neoclassical style became more imposing and more massive. The battles in Egypt strengthened the preference for motifs from ancient Egypt. Napoleon’s portrait appears on firebacks and andirons. For andirons, that was often in the form of a reclining head. The motif of the Sphynx was also popular for andirons in this time. This style is described more comprehensively below.

Click here for: Our current stock online of Neoclassical and Georgian fireplace accessories. The Empire style is a Neoclassical style that has such specific style characteristics that we identify it separately. The Empire style is literally named after the empire of Napoleon (1804 – 1814). Napoleon won battle after battle and surrounded himself with riches, both stolen and newly created. The battles in Egypt strengthened the preference for the grandeur of ancient Egypt. In addition, Napoleon drew inspiration from the Roman Empire. Napoleon developed the Empire style himself. The style is a more imposing and more massive version of the Neoclassical style, with frequent use of sphinxes, palm motifs, military motifs, the eagle, the letter N, portrayals of Napoleon, the winged victory and the laurel wreath.

We also see these motifs on firebacks in this style. For andirons, the sphinx was a popular motif, as was the head of Napoleon, often in the form of a reclining head. 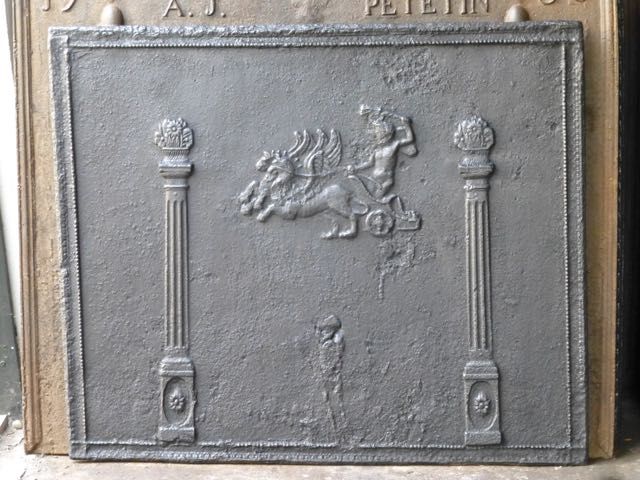 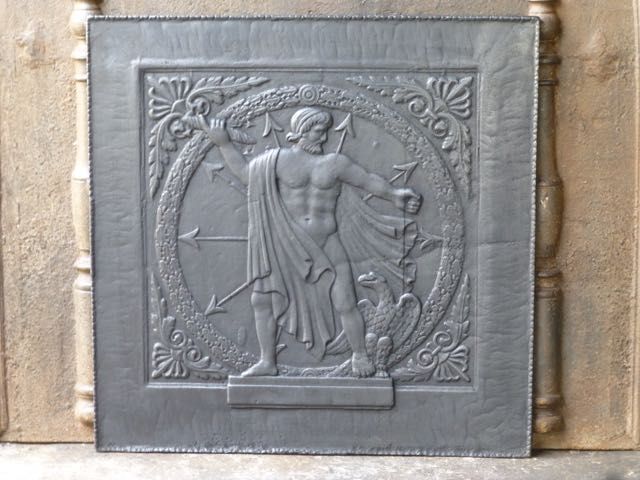 In this period of social turbulence, no one style predominated; rather, next to the Neoclassical style, all kinds of neo-forms arose that were a reaction to the strict Neoclassical style. There is Neo-Gothic, based on religious and social conservatism where people thought that art and architecture from the Middle Ages was authentic and morally correct. Pointed arches, flower details, coats of arms motifs and refined woodcutting were central in this style. In addition, there is the Neo-Baroque, which draw from sumptuous, romantic forms and themes. Together with the Neoclassical style, that also produced many mixed forms.

The key here is that all the style forms and mixed forms draw from the past. In this period, many reproductions were made from old firebacks and firebacks without a specific style. After 1850, fewer firebacks were made on which the date of the casting of the fireback is printed. 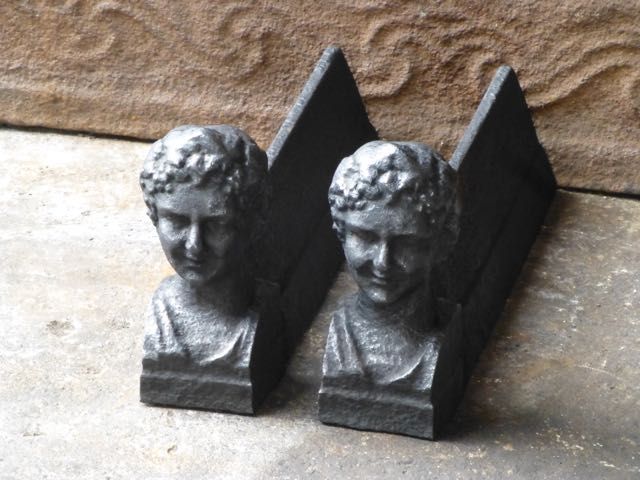 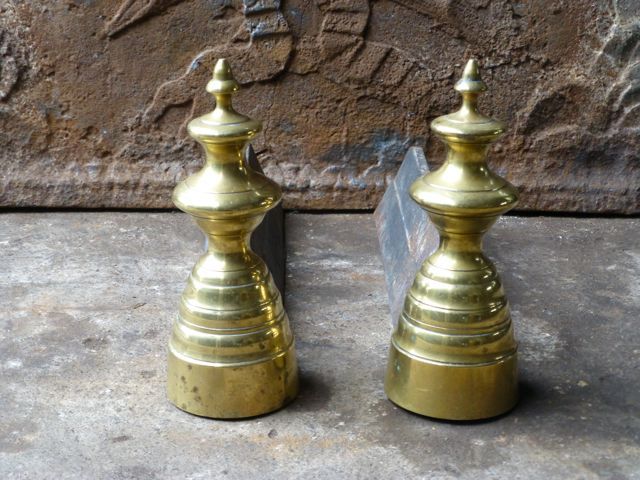 In order to give shape to the new industrial society, artists searched for a style that no longer drew from the past, but that came out of their own inspiration. In addition, they wanted to resist the mass production that resulted from industrial society. It was no longer about everyone doing the same thing, but about individual artistic expressions. Craftsmanship was important in that. Round shapes and motifs from nature were central: flowers, trees, insects and animals. The artists tried to establish an environment with total art in which humans could thrive in the early 1900s.

In this period, more and more people used coal stoves for warming their homes, in place of the open fireplaces or the wood stove that was also used well into the 19th century. This meant that fewer and fewer fireplace firebacks and andirons were produced.

Click here for: Our current stock online of Art Nouveau and Arts and Crafts fireplace accessories. 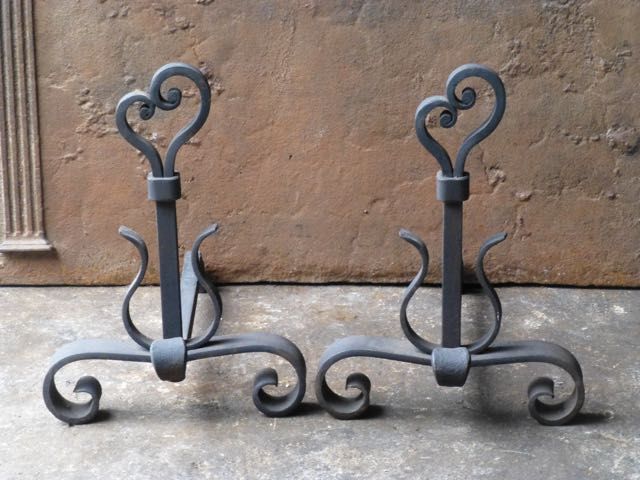 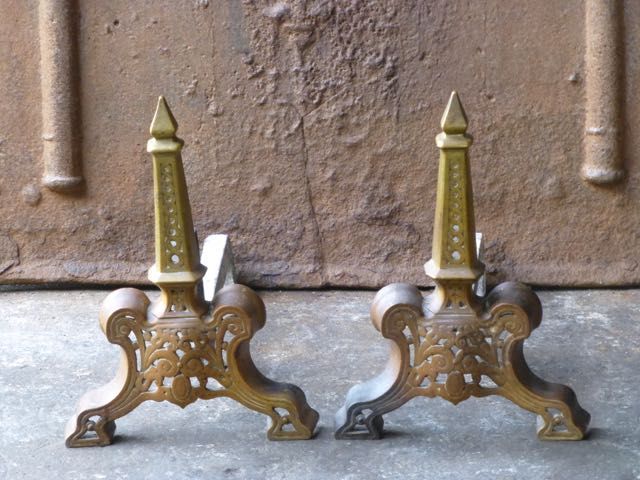 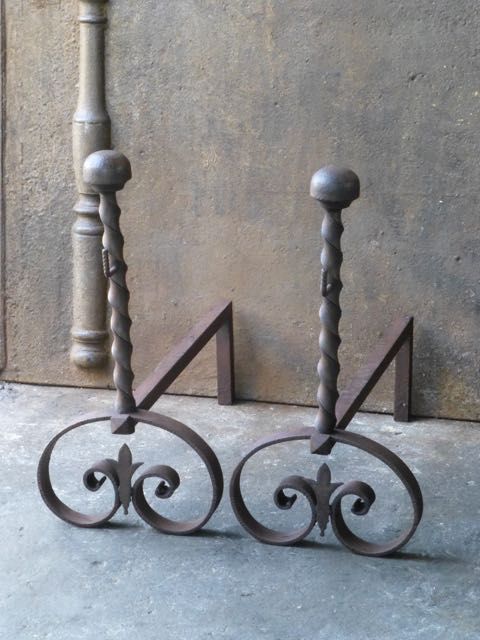 Before the First World War, Art Deco developed as a reaction to the organic forms of Art Nouveau. People returned to the strictness of classicism: symmetry and the stylistic classical principles. Order, colour and geometry are important elements. Within that, Art Deco includes different streams with their own influences, such as Eastern, Gothic or romantic influences. Each stream has its own architecture and furniture.

If fireplaces were built in Art Deco houses, then the fireback was often an integrated part of the fireplace, as can be seen in the photo below. There are more Art Deco andirons in circulation. In this time, there were both traditionally made products produced for the elite and industrial products for the masses. The same applied – then and now – for the fireback and the andirons.